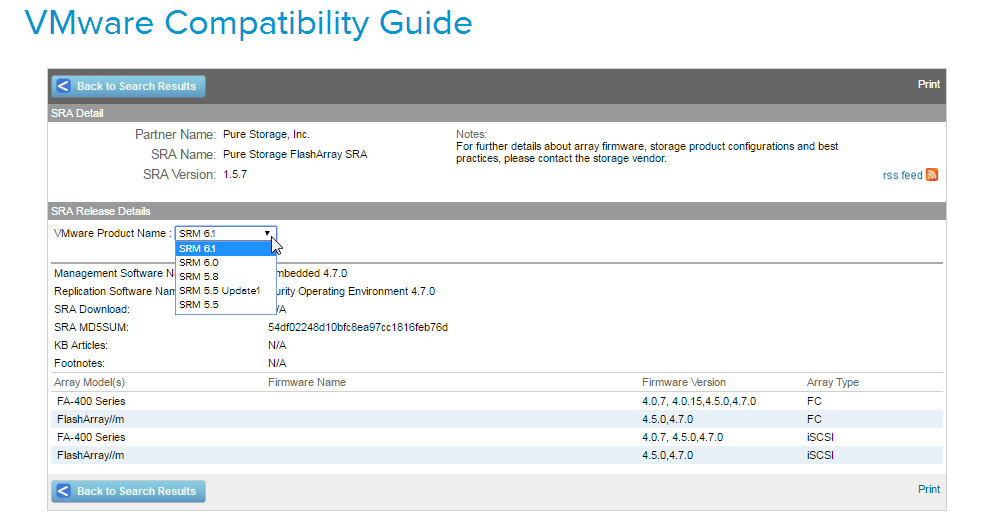 The SRA can be downloaded from VMware here:

This is the latest version fully supported by VMware and Pure Storage.

So, in general, there is not a lot of new functionality in this release (new features will be focused in our next major release). This is mostly focused at compatibility and fix inclusion. But a major enhancement is performance improvement of failover.

Please note though, this is performance improvement in the algorithm of the SRA in identifying the proper snapshots etc. to failover with. Not with let’s say replication itself, (improvements like that get integrated directly into Purity). The SRA improvement will greatly reduce the time it takes for the SRA to identify the correct snapshots to use as compared to how it used to look. Mostly only customers with large recovery plans or large amounts of FlashArray snapshots (thousands) will see the big improvements.

Essentially, the process used to iterate through a lot more steps when finding the latest snapshots for a volume or set of volumes, and the more volumes you had the longer it took by quite a bit. Now through some improvements in our logic and also using a few different REST calls to sort data for the SRA before we even get it, we reduce the number of API calls for each volume to be failed over from possibly hundreds to just a few. In large environments this means dropping the testFailoverStart process, for instance, from possibly 10 minutes or more, to a few seconds.

So who should upgrade?

Basically everyone, but there are few that should definitely do it sooner than later: