Today, device recognition is used via information in the page 83 of the device VPD. This has things like the device serial number (sometimes called a WWN). This, in combination with the vendor Organizational Uinque Identifier OUI, creates what is called a Network Address Authority. This does not use the LUN ID in calculation.

So this allows ESXi to identify volume uniquely without using the LUN ID anymore. Though they still do keep some old identifiers that do use the LUN ID to generate the ID. Namely the VML, or VMware Legacy identifier.

This is a much longer ID and depending on the ESXi version, which use the LUN ID in a few places. This KB article explains:

In short, the LUN ID is used in the early part of the ID and in version prior to 5.5 used as part of a hash for the tail portion. In 5.5 and later, ESXi just zeroed out the LUN portion to the hash wouldn’t change due to LUN ID. But the earlier part of the ID that used the ID does change. If you had different LUN IDs, multiple VMLs would be generated for a volume.

Now on the FlashArray, we ensure LUN ID consistency when presenting a volume to a host or a group of hosts. But with our release of ActiveCluster, you could present the same volume from two arrays at once (using active/active replication) when configured in a Uniform configuration. This introduced the possibility to use one LUN ID for a device’s paths on one FlashArray and a different LUN ID for the paths to the other FlashArray. 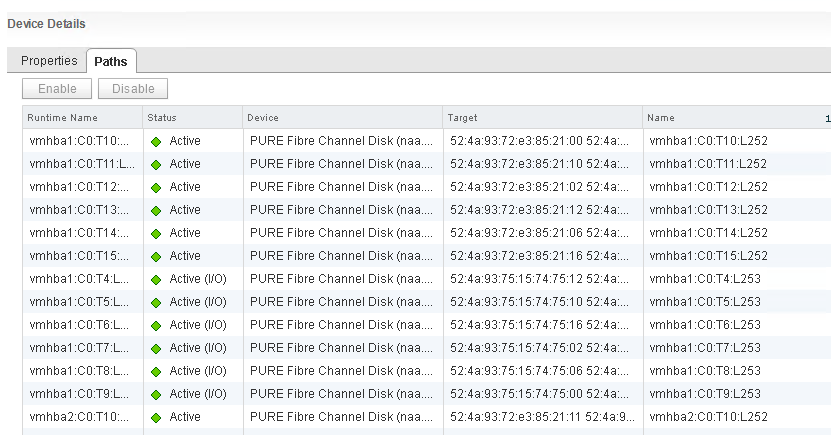 You can see in the above screen shots, from my preferred FlashArray (the one local to my host) uses LUN ID 253, and the paths to my remote FlashArray use LUN ID 253.

In this case, my host will only use the remote paths if the local one goes away.

Anyways, the point is that since I have two different LUN IDs for this device on this host, ESXi generates two VMLs:

You can see the LUN ID in it if you look at the start of it:

So why am I bringing this up if it doesnt matter any more? Well in ESXi 6.5 support for multiple VMLs were dropped. So when a device was discovered and it had more than one LUN ID on that host, ESXi would not claim it and would not use it. You’d see messages like in this KB article:

The insidious thing about this, was that let’s say you added a device on a certain number of paths. In my case, I added it from only my first array and all paths had the same LUN IDs. ESXi would be great with that and it could be used. But then later on, I enabled active-active replication and then presented paths to it from the second array. But these paths had a different LUN ID. ESXi 6.5 would actually be fine with that. This is because the device has already been claimed, and it seems VML addresses are only added when the device is first claimed, but not when just new paths are added. Since basically nothing uses VMLs, things would work fine.

But then you reboot. This causes all devices to be reclaimed. Oh, ESXi sees different LUN IDs, doesn’t like multiple ones, so it doesnt claim the device. So that device becomes unavailable after a reboot even though it worked before.

So the above KB article claims this is an expected result. This is not true, it is a regression bug. And it has been fixed in ESXi 6.5 U1:

So, in short, upgrade to ESXi 6.5 U1. Especially if you are using uniform active/active replication.