Another UNMAP post, are you shocked? A common question that came up was what volumes have dead space? What datastores should I run UNMAP on?

My usual response was, well it is hard to say. Dead space is introduced when you move a VM or you delete one. The array will not release the space until you either delete the physical volume, overwrite it, or issue UNMAP. Until vSphere 6.5, UNMAP for VMFS was not automatic. You had to run a CLI command to do it. So that leads back to the question, well I have 100 datastores, which ones should I run it on?

So to find out, you need to know two things:

The delta between this is the amount of dead space that can be reclaimed. If the array number is much higher, that means there is a lot of dead space. Because that delta represents the space consumed by files that have been deleted or moved.

With a Data Reduction AFA like the FlashArray, this is not necessarily a simple thing. The FlashArray, for instance, reports how much space after data reduction is being stored.  Data reduction including pattern removal (such as zero removal), compression and deduplication. So this reduces the footprint of what the FlashArray reports as actually used. So you can’t really just compare the two numbers.

But the 20 GB is still far less than file system-reported 60 GB. So you don’t really know that you have up to 20 GB of dead space (depending on how reducible the deleted space is dictates how much you will actually get back) it just looks like your data set is reducing 3:1 now instead of 4:1.  So unless you deleted A LOT of data (or your data set is not reducible), it would be hard to know you have dead space on a volume because our number is almost always going to be lower than whatever the file system says.

So this begs the question–is there a way on the FlashArray to see what the host has written in total at a point in time for a given device, before data reduction? Well up until recently I didn’t think so. But after an unrelated conversation with engineering I found out there is indeed a way to figure this out!

So we have a metric called “thin_provisioning” and this is reported as a percentage in our CLI and REST and not reflected in our GUI.

I always thought this was a throw-away number, who cares about thin provisioning savings? All that matter is how well your actual data is reduced by data reduction techniques? Who cares how much physical capacity is saved by using array-based thin provisioning? That is sooo 2008…

Pretty simple! So you take this number and subtract what the file system itself shows as written you get the dead space!

Now to look at the FlashArray volume. You can do this a variety of ways, I used our REST API via vRealize Orchestrator and our vRO plugin. You can use anything that can make REST calls or of course our CLI.

This is the GET REST call with the URI of:

The CLI command would be:

I prefer REST because it gives you a very accurate number. The CLI reports just two digits. But that is probably good enough regardless.’

If I run that number through the math:

I get the FlashArray reports 319.77 GB as used. Which is exactly (well other than some rounding error) what VMFS sees! So let’s create some dead space–I will delete half of my VMs. 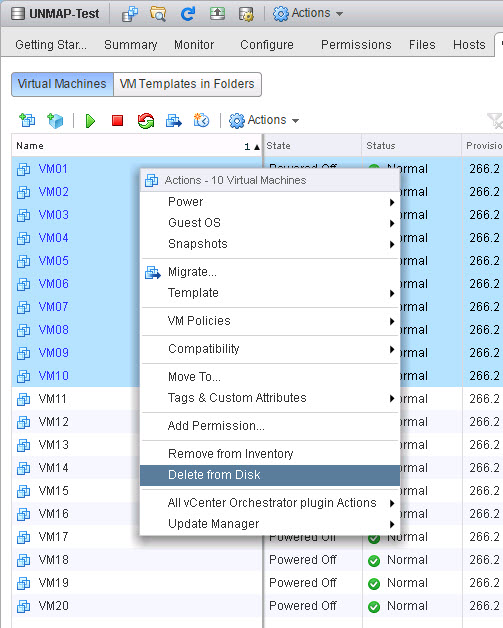 We can see that half have been deleted and I now have 160 GB used instead of 320 GB.

But if we look at the FlashArray, we see that the thin_provisioning value has not changed. This is because it does not know that these VMs have been deleted. So it still reports 320 GB as being used by the file system.

A million ways to run UNMAP, but I will just use the old fashioned SSH and esxcli:

Now if we check the thin_provisioning value for that volume again it is now up to 92%, and if you do the math that is now at the 160 GB like VMFS reports! Dead space totally gone!

So a quick FAQ:

Q: If I run UNMAP on this volume, will I get physical space back on my array?

A: Maybe, maybe not. This is reporting dead virtual space, so if that space is heavily deduplicated it may not be returned immediately. Running UNMAP on the FlashArray is about cleaning up the meta data tables. Once the final meta data pointer has been cleared for a given block, the physical space of that block will be returned.

A: Since space reclamation is automatic with VMFS-6, this is really only targeted at VMFS-5. So upgrade to vSphere 6.5 and VMFS-6 and you don’t need to worry about this anymore.

Q:How to I automate this?

A: I wrote a PowerShell/PowerCLI script! Read on.

So I wrote a PowerCLI script to automate the discovery of this. This script does the following:

26 Replies to “Detecting what FlashArray VMFS Volumes Have Dead Space”