I posted a few months back about ESXi queue depth limits and how it affects performance. Just recently, Pure Storage announced our upcoming support for vSphere Virtual Volumes. So, this begs the question, what changes with VVols when it comes to queuing? In a certain view, a lot. But conceptually, actually very little. Let’s dig into this a bit more. 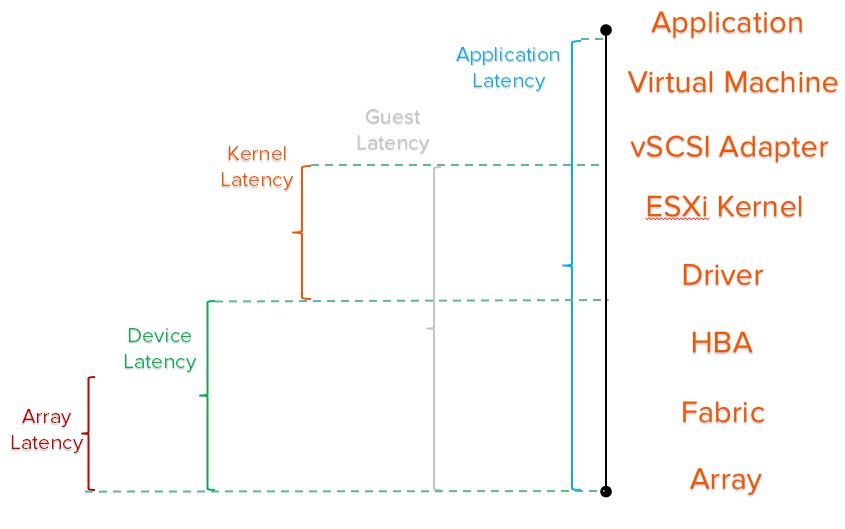 So to review, there are a few important queue depth limits:

So what about protocol endpoints? Let’s review quickly what they are.

ESXi has device and path limitations (256 devices/1,024 logical paths in ESXi 6.0 and earlier, and those number doubled in 6.5). So presenting a VVol to a host in a normal way would very quickly exhaust available paths and devices. So it needed to be done in a different way. So virtual volumes use the concept of an administrative logical unit (ALU) and a subsidiary logical unit (SLU) (more info can be found here in a SAM-5 draft).

An ALU is a device that has other devices accessed through it as sub-LUN. Kind of like a mount point. A SLU is one of those sub-LUNs–it is only accessible via an ALU.

Which then begs the question: Will my PE be a performance bottleneck? All of the I/O for those VVols go to the PE and then are dealt with by the array. So the multi-pathing and queue depth limits are set on the PE. Let’s take a look at how queue depth limits work with PEs.

So first off, the storage array queue depth limit depends on the array, so ask your vendor. The FlashArray doesn’t have one, so any possible bottleneck on that front would be in ESXi (or eventually the array itself). From the guest perspective, nothing changes. PVSCSI settings and queues are identical to what happens with VMs on VMFS. So refer to my earlier post on that.

NOTE: DSRNO doesn’t really exist any more–as that was a host-wide setting retired in ESXi 5.5. It is now a per-device setting called “No of outstanding IOs with competing worlds”.  I am just going to keep using the term DSRNO because it is just easier to type 🙂

The DSRNO setting for a standard device defaults to 32. In ESXi 6.0 and earlier this could be increased up to 256. In ESXi 6.5 this can be set to a maximum of whatever the current HBA device queue depth limit is.

Protocol endpoints do not default to 32. They default to 128 and this setting is controlled with a new setting called Scsi.ScsiVVolPESNRO–this is a host-wide setting.

Now, this setting just handles the default queue depth limit for a PE. But it can be set and handled individually as well. And doing this is no different than with a standard volume, you change the No of outstanding IOs with competing worlds value:

This allows you to override this value for individual PEs, if you want. My PE below is presented via software iSCSI, so the default HBA device queue depth limit is 128. The default setting for Scsi.ScsiVVolPESNRO is also 128, so both are reflected as such in the esxcli storage core device list -d command: 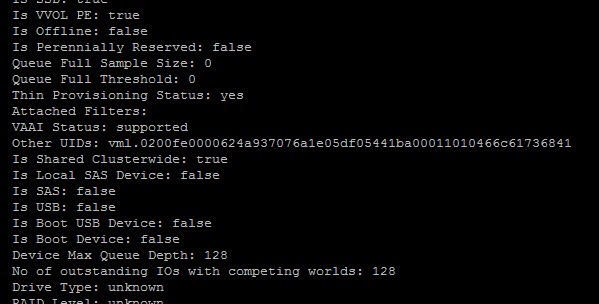 So if I want to up this setting for all PEs I could change  Scsi.ScsiVVolPESNRO to whatever. Let’s say 256. But that would require a reboot. So the other option is to use the esxcli command. Individual PESNRO follows the same rule as DSRNO does though–it cannot be set higher than the HBA device queue depth limit. As seen above, my current HBA device queue depth limit is 128. So, if I try 256 it will fail:

So, I need to up my HBA device queue depth limit, which requires a reboot.

Now I can try to set the PESNRO on this specific PE to 256:

This time it works and my ” No of outstanding IOs with competing worlds” is up to 256.

So the point is, that the number of outstanding I/Os can be set very high for a protocol endpoint.

Do I need more than one PE?

Well this is really up to your storage vendor, and of course it depends on the underlying capabilities of a single PE. So, for the FlashArray instance where the physical device (PE) isn’t a bottleneck on the storage side, do I need more than one?

The crux of this is a very simple equation referred to as Little’s Law:

This is a fancy way of saying if it takes a certain amount of time to do a task, take a certain duration of time and divide it by the the task time and that is how many times it can be done in that specified duration if done in a serial fashion. Let’s take the fast food restaurant example. If it takes a customer 1 minute to be served, the store can help 60 customers in an hour (60 minutes/1 minute). This is the case of one register.

So. Let’s look at this from a storage latency perspective. Let’s say my average latency is 1.0 ms. I would usually expect it to be half that or even less, but let’s be conservative and say 1.

This is all somewhat theoretical at this point, just basing it off some early testing and simply running the numbers. But, I’d say at least for the FlashArray one PE per array should be fine. I will update this as I do more testing–look for my best practices document for VVols close to our actual GA.