The benefit of that design is that you can delete the volume groups, rename them, or add and remove other volumes to it. Giving you some flexibility to group related VMs or whatever your use case might be to move things around, without breaking our VVol implementation.

END_OF_DOCUMENT_TOKEN_TO_BE_REPLACED

This post I will talk about using PowerCLI to run a test failover for VVol-based virtual machines. One of the many nice things about VVols is that in the VASA 3.0 API this process is largely automated for you. The SRM-like workflow of a test failover is included–so the amount of storage-related PowerShell you have to manually write is fairly minimal.

END_OF_DOCUMENT_TOKEN_TO_BE_REPLACED

I have released a new version of the VMware/Pure PowerShell module which can be automatically installed from the PowerShell Gallery.

Updates in this release are focused on VVols. Creating VVol snapshots, copying them, creating new disks from them, retrieving them etc.

I wrote a blog post below on using some of the new cmdlets:

END_OF_DOCUMENT_TOKEN_TO_BE_REPLACED

I see a fair amount of requests around how to do different things with VMware PowerCLI and the Pure Storage PowerShell SDK. How do I correlate a VMFS to a volume? How do I create a new VMFS? How do I expand? Etc.

To help our customers I have written a module that includes a lot of the common operations people might need to “connect” PowerCLI to our PowerShell SDK.

My last post in this series was about getting a VVol UUID and figuring out what volume on a FlashArray it is. But what about the step before that? If I have a guest OS file system how do I even figure out what VMDK it is?

There is a basic option, which can potentially be used, which is correlating the bus ID and the unit ID of the device in the guest and matching it to what VMware displays for the virtual disks.

But that always felt to me as somewhat inexact.  What if you accidentally look at the wrong VM object and then do something to a volume you do not mean to? Or the opposite?

Not ideal. Luckily there is a more exact approach. I will focus this particular post on Windows. I will look at Linux in an upcoming one.

END_OF_DOCUMENT_TOKEN_TO_BE_REPLACED

There are a variety of ways to assign and set a SPBM Policy to a VM. I recently put out a workflow package for vRO to everything VVols and Pure:

I also specifically blogged about assigning a policy to a VM with vRO:

How do you do this with PowerCLI?

END_OF_DOCUMENT_TOKEN_TO_BE_REPLACED

VMFS Snapshots and the FlashArray Part IV: How to correlate a VMFS to a FlashArray volume END_OF_DOCUMENT_TOKEN_TO_BE_REPLACED

Quick post. I updated my PowerShell GUI tool I maintain for VMware and FlashArray management and added some new features. This time mainly around protection group management. Download it from my GitHub page here: 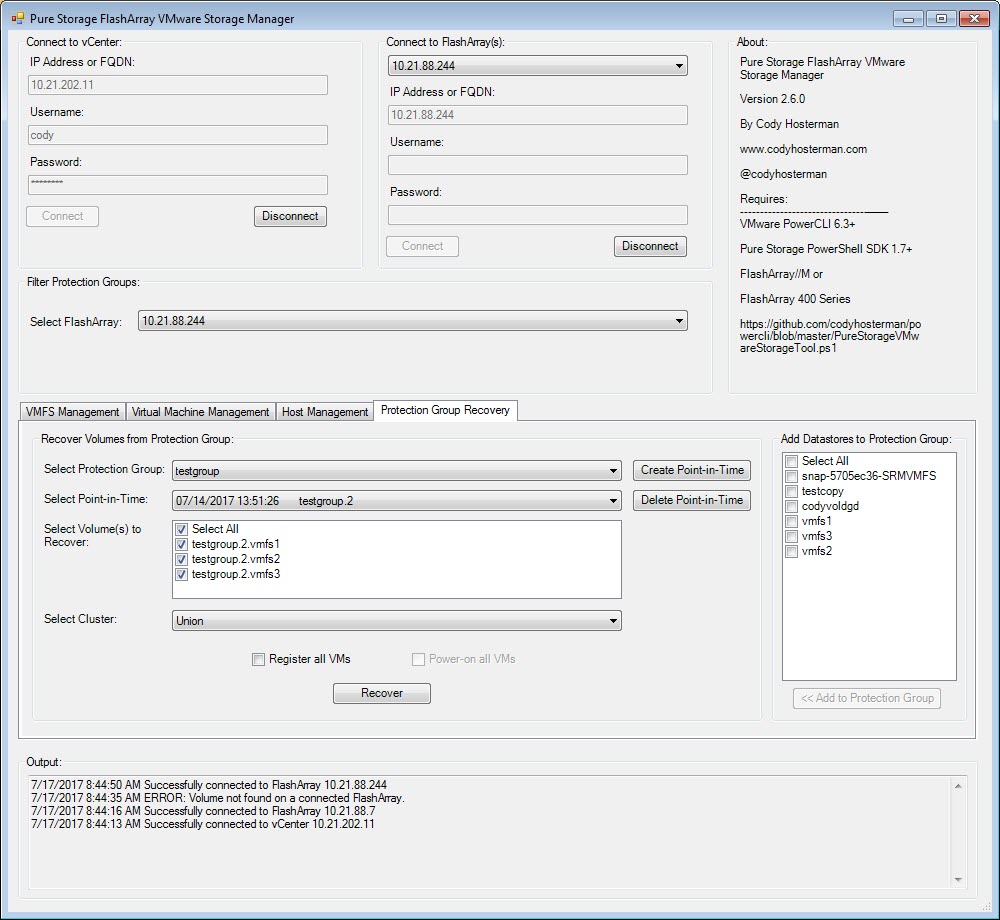 END_OF_DOCUMENT_TOKEN_TO_BE_REPLACED

I will only update this post if the unattended version changes in a way that makes these instructions wrong. END_OF_DOCUMENT_TOKEN_TO_BE_REPLACED

Here is my storage manager for the FlashArray and VMware. Based on PowerCLI, but uses a front end GUI. Enjoy!

NOTICE THIS HAS BEEN DEPRECATED IN FAVOR OF THE POWERSHELL MODULE HERE:
https://www.codyhosterman.com/scripts-and-tools/pure-storage-powershell-vmware-module/

There are a variety of methods of managing VMware objects (VMFS volumes, VMs, VMDKs and RDMs) and the underlying snapshots to recovery or clone them. But often I get asked if I have a PowerShell (PowerCLI) script to do one or all of them. I have a bunch on my GitHub, but I decided a week or so ago to put something a bit more robust together. At first I was making it a standard interactive script, but it morphed into a GUI, using combo-boxes etc: