Let me start out with saying I’m embarrassed I have only been using vRO for 8 months or so. It is AWESOME.

The FlashArray Workflow Package for vRealize Orchestrator has been updated to include two new objects:

The creation of the first part is explained in this post. But if you are using the FlashArray it is all built into the package, so you have to do very little work. I’ll explain in a bit.

The UNMAP workflow is generic–it can be used with any VMFS datastore that supports UNMAP. So it is included in the workflow package and it is also standalone for those of you who don’t have a FlashArray. You can get the standalone here:

This release of the workflow package includes a template that you can deploy a policy from. This policy will do the following:

See a demo of it here:

This is a simple one–but one I have been wanting to get around to for quite some time. Running UNMAP on a datastore from vRO! In vSphere 6.0 VMware added (see a post from William Lam) an SDK call for running UNMAP (yay!) which opened up what you could do. UnmapVmfsVolumeEx_Task can be called to any ESXi 6.0 host to reclaim dead space using the vCenter SDK.

So using this, I built a quick workflow. This work flow takes in a datastore and looks for an ESXi 6.0 host that sees it, grabs the first host it finds then runs UNMAP. The workflow will wait until the operation is done. The operation does not advertise progress, so it is hard to say when it will finish.

This is built into the workflow package. But I figured people using other storage systems might want to use it too, so I made it available for download separately too.

I do plan on enhancing it somewhat specifically for the FlashArray, to make capacity reports etc. But that’s for the future. 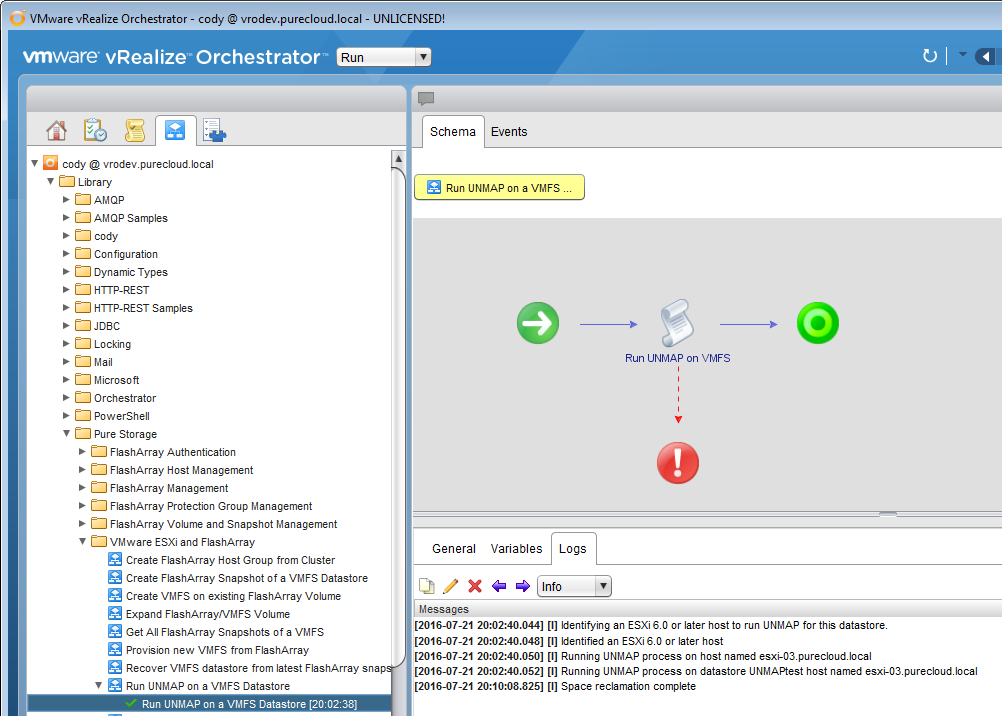 One note of caution. The vCenter SDK call does NOT support changing the block count. Ugh. So it uses the default block count of 200 always. So this can drastically slow down the UNMAP process on a variety of storage systems. So FYI.