With the introduction of our Active-Active Synchronous Replication (called ActiveCluster) I have been getting more and more questions around multiple-subnet iSCSI access. Some customers have their two arrays in different datacenters, and also different subnets (no stretched layer 2).

With ActiveCluster, a volume exists on both arrays, so essentially the iSCSI targets on the 2nd array just look like additional paths to that volume–as far as the host knows it is not a two arrays, it just has more paths.

Consequently, this discussion is the same as if you happen to have a single array using more than one subnet for its iSCSI targets or if you are using active-active across two arrays.

Though there are some different considerations which I will talk about later.

First off, should you use more than one subnet? Well keeping things simple is good, and for a single FlashArray I would probably do that. Chris Wahl wrote a great post on this awhile back that explains the ins and out of this well:

But in an active-active situation, where arrays are in different datacenters, you might not have the ability to stretch your layer 2. So let’s run on that assumption and walk through what it looks like.

Let me define first what “iSCSI port binding” is. When you use the Software iSCSI adapter in ESXi, the default option is that it is not tied to any particular vmkernel port (and therefore physical NIC).

In this situation. when iSCSI sessions need to be created to a target array, the software iSCSI adapter will use the ESXi IP routing table to figure out what vmkernel port to use.

Use vmk3 to create the iSCSI sessions.

The problem here is that it only uses the first vmkernel port it finds. So it will not multipath internally to the host. Yes there are multiple paths to the array, but that is just based on the number of targets on the array. So you are limited to the bandwidth from the single NIC on the ESXi host, so you likely cannot take advantage of the multiple iSCSI target concurrency the array offers.

I wrote about setting port binding up here:

See a blog post I wrote about the differences in detail here:

Another look at ESXi iSCSI Multipathing (or a Lack Thereof)

So how does this change with multiple subnet-homed arrays
(or sets of arrays replicating in an active-active fashion)?

Let’s run through some scenarios, but first let’s look at my environment.

I have a VMFS datastore (called iscsipod::VMFSFA) that is on a FlashArray volume replicated with ActiveCluster so it is available on both of my arrays simultaneously. 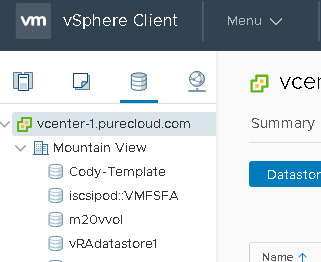 As you can see it is hosted by two arrays: 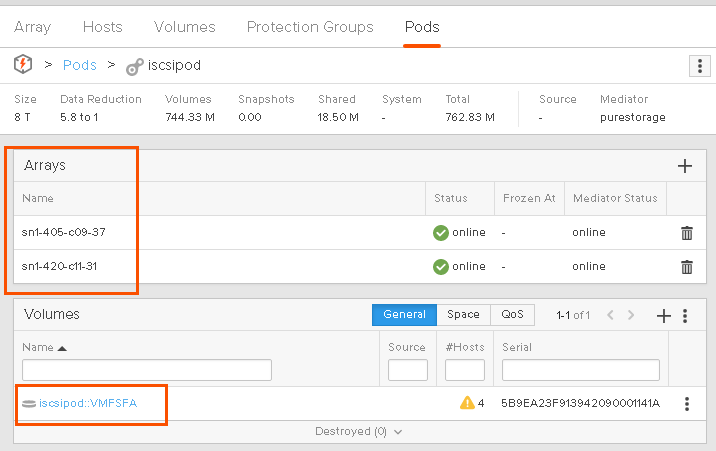 I have 4 iSCSI targets on one array and 3 on the other array for a total of 7 targets. 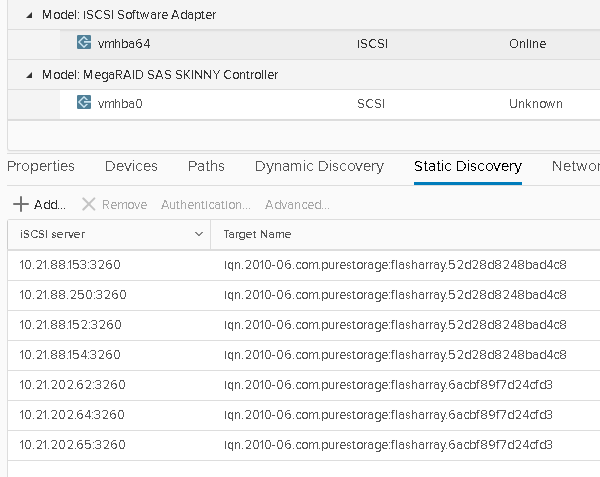 Now let’s walk through some scenarios.

The first situation is that my source host is only on one subnet and my target arrays are each using a different one (in the case of ActiveCluster) or I have a single array that is using two subnets by itself.

If the different subnets can route to each other, than the next two sections are relevant. The host can talk to both arrays through routing.

If the subnets are closed off and cannot route to one another, than this is a different story and your host won’t be able to communicate at all with the array/ports in a different subnet. In this case, you can pretty much just follow what is laid out in this post here:

Another look at ESXi iSCSI Multipathing (or a Lack Thereof)

In this situation, I have no vmkernel adapters bound to my iSCSI adapter:

Furthermore, my host only has one vmkernel port which is on the subnet of my first array (VLAN 2022). 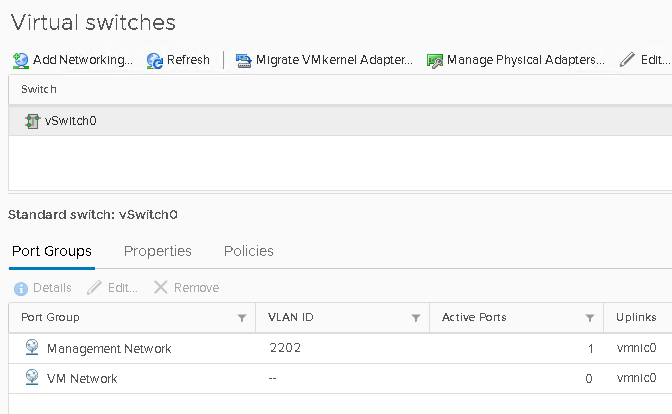 If I look at my IP routes on that host, we see yes it only has a route through vmk0:

This means all traffic will go through vmk0.

mkk0 is configured to use two different physical NICs in my vSwitch:

Which are both active: 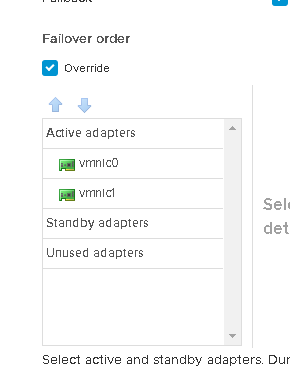 What if I kick off a workload?

I will start one off with vdbench:

If we look at esxtop and the network statistics (ssh into ESXi, type esxtop, then type n), we see that only one physical NIC is being used:

vmk0 (vmkernel port) is being used, as expected, and so is vmnic0 (physical NIC). But vmnic1 is not being used, even though it is assigned to vmk0.

This is because ESXi only creates one session per vmkernel port and it uses the first available NIC, in this case, vmnic0.

It is reporting us pushing about 2500 megabits per second, which is 312 megabytes per second. This can be proved out in esxtop by looking at the datastore:

What if I add a second vmkernel port?

Nothing changes, as it still uses just the first vmkernel port, vmk0.

Through out all of this, the host always has 7 paths to the array for that datastore. All 7 go through that vmkernel port and that one NIC to the various iSCSI targets on my arrays. 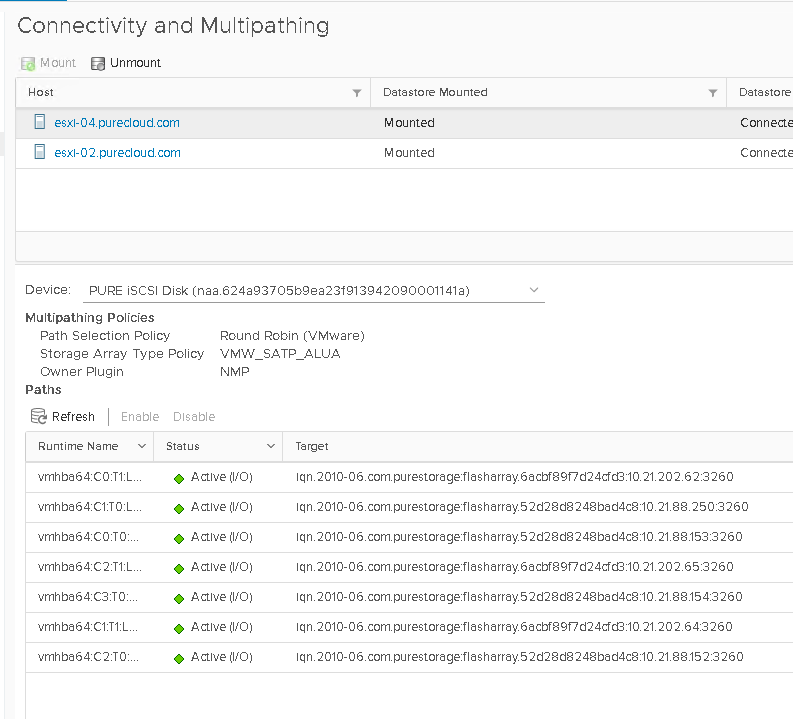 Now let’s do some port binding.

In this case I have created two vmkernel adapters, and as required by port binding, each vmkernel port only has one associated physical NIC (vmnic).

Then I bind them to the Software iSCSI adapter:

They are now bound:

So what I have done is told ESXi, “okay create iSCSI sessions through each one of these vmkernel adapters”.

One thing you will immediately note is that we now have 14 paths to my datastore: 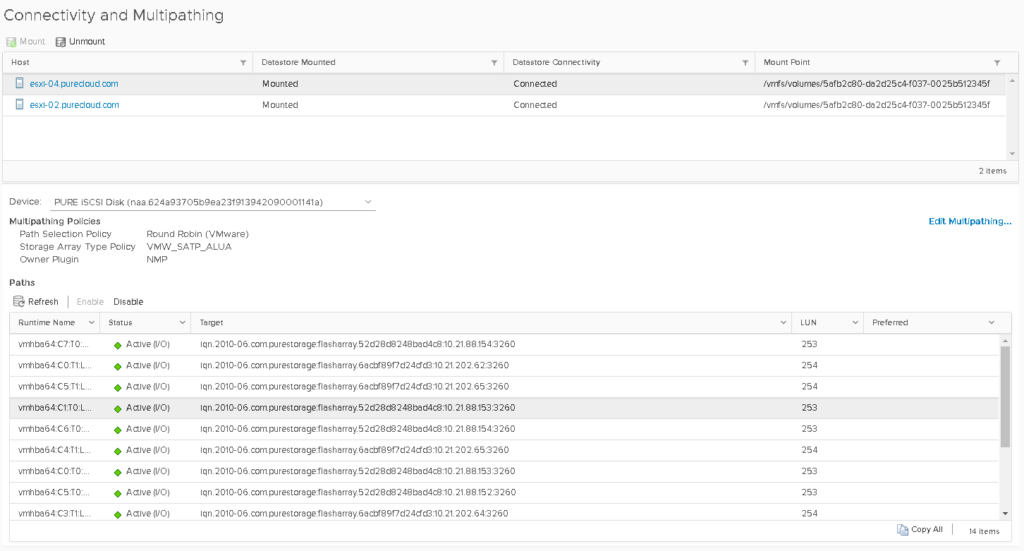 So my path count has doubled.

This is due to the fact that the iSCSI adapter is now using both vmk0 and vmk1 and both of their respective NICs, so each vmkernel port has a path to each FlashArray iSCSI target.

Let’s kick off the workload again.

In esxtop, we can see that it is now using both vmkernel adapters and both of their physical NICs:

Furthermore, since vdbench has more resources to play with (two physical NICs) it can push more throughput:

So the benefits of porting binding can be obvious.

But are there downsides?

First off, you can double/triple/etc. your path count–depending on how many vmkernel adapters you add. ESXi only allows 8 paths per iSCSI datastore (this limit still exists even with vSphere 6.7), so you could potentially reach that limit (they support 32 for FC, so if you want more for iSCSI please tell VMware). Once you hit that limit, the specific paths that are dropped cannot really be predicted. So make sure you stay at 8 or lower. This is of course IF your subnets can route to one another. If they can’t then you will still only have the paths local to your host subnet.

Again, if you are running a version of ESXi prior to 6.5, routing is not supported with port binding. So in other words, I would not be able to use the paths to my 2nd array which is in a different subnet.

If I was using ESXi 6.0 and earlier, in order to use port binding to two different arrays for the same volume, I would have to stretch my layer 2 so that both arrays are on the same subnet.

What if my host does have access directly to both subnets? Meaning that it has vmkernel ports on both subnets? 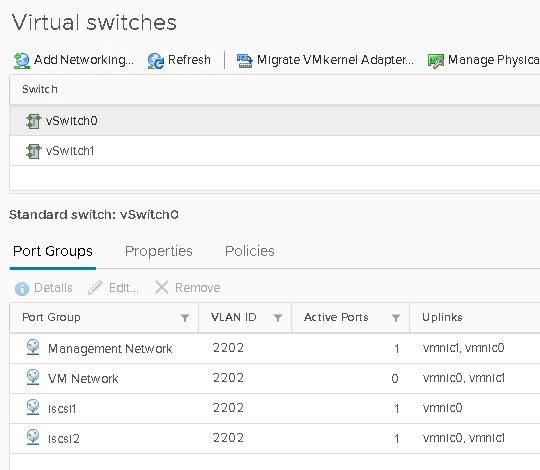 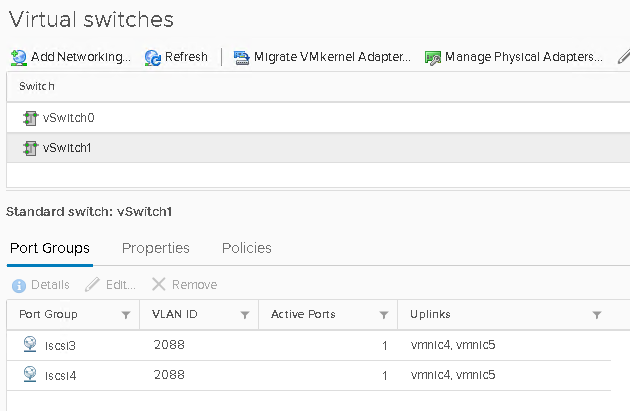 So I have direct access to both subnets from this host. In the case where subnets are completely segregated, this is what you would want to do. This gives you tighter control over where the traffic goes.

Let’s remind ourselves what the IP routing table of my single-subnet host looked like:

But in this host, that has vmkernel ports on both subnets, looks like so:

We now have a route for the 2088 VLAN. This changes things a bit. Especially when not using port binding. So let’s look at that first.

If you remember, when I didn’t use port binding, I had 7 paths (7 targets). My one vmkernel adapter (and its corresponding physical NIC) had paths to all targets. What about now? 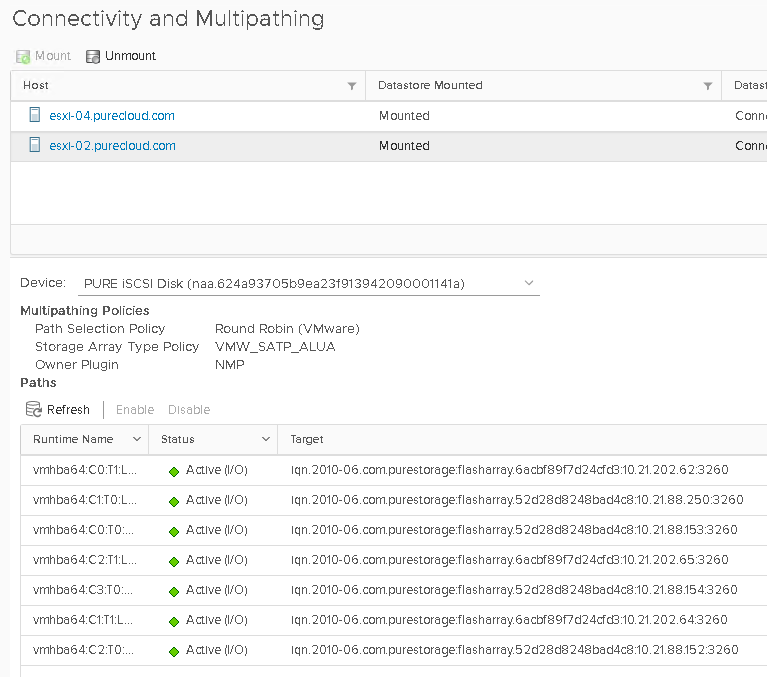 We still have 7 paths! The difference is that these paths are going through two different vmkernel adapters. The paths on VLAN 2202 are using vmk0 and the paths on VLAN 2088 are using vmk3. So my logical paths are now spread across the two physical NICs instead of just the one. Providing more bandwidth, without increasing the logical path count. This is especially useful in ESXi version prior to 6.5 where iSCSI port binding required all vmkernel adapters to be able to connect to all iSCSI targets.

Let’s kick off a workload and prove this out. 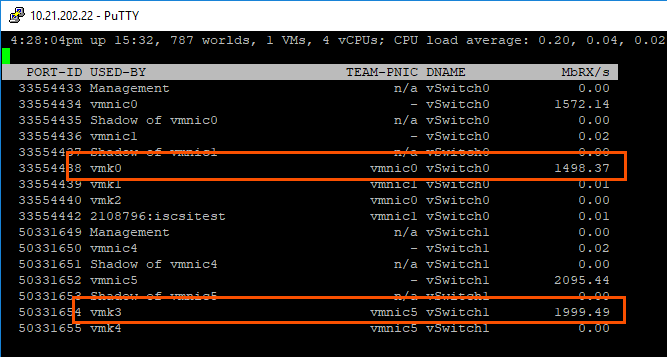 I/O is going through both vmk0 and vmk3.

I am not really going to spend any time on this, because it is exactly what you expect. Each bound port has paths to the target it can reach.

What should you do? Well in general, Chris Wahl says it best here:

If your design/infrastructure enforces multiple subnets–forgoing port binding is probably the way to go. But if you can get away with one subnet, go for it and port bind. Though you definitely want to make sure that your host has vmkernel ports on both (or all) of the subnets so you can get the concurrency of all of the NICs. Especially if the different subnets cannot route to one another.